My First 6 Months with Baby Carly

I have been meaning to write an update on baby Carly for awhile now and what better time than on the eve of her turning 6 months old (so scary how fast time is flying by these days!).

I can't quite believe that six months ago I was calmly ignoring the fact that I was in labour whilst picking Cameron up from nursery, cooking dinner for everyone and watching the new series of The Big Bang Theory. I was three days overdue and, due to awful migraines and high fluid levels, booked in for an induction in four days. Tim had bought me a session of reflexology after I had told him it was meant to help bring on labour and it had actually worked, my contractions began during the treatment and slowly intensified throughout the evening. I refused to believe I was actually in labour until 10pm due to a lot of annoying false starts over the past couple of weeks. It was only, after going for a walk around the block and barely being able to stand up straight for the pain, that I admitted defeat and called the maternity ward who told me to make my way in. When we arrived I was examined and told I was 3cm but that I could stay in and try out the pool etc to get things going a bit more. Everything went quite quickly after that and soon I was 4cm and in established labour. Once my waters were broken (and I subsequentally flooded the room), things went extremely fast and I was pushing just 45 minutes later.

At 4:34am on Friday 16th November 2012 my beautiful baby daughter was born and placed into my arms. Carly weighed just half an ounce under 8 pounds and I immediately felt such an overwhelming love for her. Due to Carly's birth being straightforward I was able to go home just 4 hours later and Cameron loved having his little sister in front of him rather than stuck in mummy's tummy.

I won't lie, it has not been smooth sailing going from one to two children and anyone who says it is must be either really lucky or be lying... but I am thankful everyday for my two amazing children and I can't wait for them to be a bit older so that they can play properly together (as opposed to Cameron trying to play with Carly by pulling her by her legs....).

I struggled a fair bit after Carly was born with breastfeeding, which didn't work properly to begin with as we weren't latching right and my nipples bled and were so sore I felt like ripping my boobs off (yes, it was THAT bad). I also had after pains that felt like I was back in established labour. I even vividly remember asking Tim for gas and air in the middle of the night a couple of days after Carly was born. I felt exhausted most of the time as I couldn't sleep when the baby slept as everyone kept telling me to as I still had a lively toddler running circles around me.

I was diagnosed with PND a few months after having Carly, something which didn't surprise me as I had PND with Cameron as well as having prenatal depression during his pregnancy and depression throughout my teeens. I have still yet to see a counsellor. I was given tablets straight away despite telling the doctor I did not feel comfortable taking antidepressants (which is why they are sat unopened in my drawer). I will beat this depression, as I have beat it in the past, and working has helped me a lot. 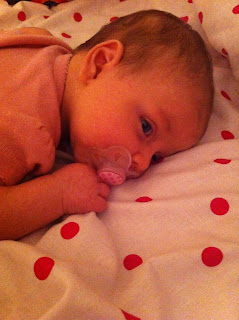 I learnt with my first child to trust my own instincts and so when Carly reached four months, despite the governmnet guidelines now saying six months for solids (they change their mind all the time!!) I started her on pureed food which she loved. She is a very hungry baby and I knew she was ready for more. I am excited now that she is at the six month stage to try out baby led weaning, she tries to grab everything I eat so I think she will love the independence of it.


As for breastfeeding, I have managed to hang on in there until this week when I gave in and bought Carly her first tub of formula. When Carly was around four months, we started giving her a bottle of formula before bed and she slept through from 8pm to 7am every day which was amazing, but I have been buying the ready made cartons for the past two months so as not to stop breastfeeding her completely. I said to myself I wanted to reach six months and I am proud to have got here as it hasn't always been easy!

Carly has started to really show her personality now and I think I am in for a tough time as she is quite the little madam! She has big tantrums when I finish feeding her (even when she has had more than she technically should have) and if I don't give her milk on time she will scream the house down. Most of the time she is such a lovely baby though and she puts up with so much from Cameron who is so over the top with her always hugging her and kissing her and pulling her hands or feet. She just sits and watches him most of the time and I know she will love it when she can move around more and play with him.

Carly loves television (though I try and limit how much she watches) and could quite happily sit and watch it in her bumbo for ages if I let her. I have taken Carly to swimming classes for the past six weeks and she has loved being in the water. I probably won't be able to carry on the classes due to time and cost restraints but I will definitely keep taking her in the pool as she enjoys the water, even with bath time she beams at me and kicks her legs around. I am so proud of her already being able to swim underwater at six months! I am looking into classes for when Carly is a little older and will be taking her to baby ballet as I wish I had had more hobbies as a child.


Carly can roll over from front to back and back to front, she still isn't sitting up unaided but she can sit for around thirty seconds before slowly falling forward- I am putting it down to laziness from her daddy's side... She has been trying to crawl for ages now but hasn't the strength to get herself going properly, I think it won't be too much longer though before she becomes unstoppable!

Carly loves toys but prefers her brother's toy cars to her pink and fluffy stuff (I am thinking she might be a tom boy, nooooo!). I take the kids for walks around the area we live in and Carly loves to look around and always wants to know what is going on. Carly has been making noises that sound like hi for a few weeks, I looked it up and she could be saying it but obviously doesn't know what she is saying yet!

I am so excited to see what the next six months has in store for us and how Carly will have developed in that time. It is crazy to think how fast the past six months have gone by and that in just nine months time she will be celebrating our wedding day with us, most likely walking and talking!