"If you don't know already, can you tell if you're carrying a boy or a girl? One hint may come from the size of your baby – boys tend to be slightly heavier than girls. Babies at week 39 weigh between 3kg and 3.2kg and continue to build the fat stores that will help regulate body temperature after birth".
What's I feel this week:

I'm not going to lie to you, I'm feeling pretty fed up this week.... I have been having severe mirgraines now for the past three weeks and have been in and out of hospital having blood tests. Luckily this week is half term which means my mum is at home and able to help with Cameron and give me a bit of a rest sometimes but I am dreading the next week or so after that as I will be alone with Cameron in the week and my migraines make it impossible to do anything. I am really hoping the consultant will be willing to at least try giving me a sweep prior to my due date if nothing happens on its own, but apparently they usually don't even worry until 41 weeks with your second.

I am massive now and finding it hard to walk around. I have been getting irregular tightenings every so often which are reasonably painful but go away after a little while so not progressing enough for labour just yet. I have also been having a lot of lower back pain and generally I am uncomfy in any position whether it be in bed on either side or sat on the settee. I have spent most of my time lately on my birth ball, not just hoping to get something started but as it is the only place I feel a bit comfortable.

I will be very relieved when this baby arrives, although I must admit I am also getting a bit nervous remembering the pain from the first time- eek! Apparently the full moon tonight is meant to bring on labour so cross your fingers for me....

"Your baby's organ systems are fully developed and in place, but his lungs will be last to reach maturity. Even after your baby is born, it may take a few hours before he establishes a normal breathing pattern. After he's born, he'll have a series of brief tests which will measure his health on what's called the Apgar scale.

Wondering what colour your baby's eyes will be? Most white European babies are born with dark blue eyes and their true eye colour – be it brown, green, grey or blue – may not reveal itself for weeks or months. The colour of your baby's eyes in the first minutes after birth won't last – exposure to light changes a baby's initial eye colour. Most babies of African and Asian descent have dark grey or brown eyes at birth, but it won't be clear what precise shade their eyes will be until after the first six months or year".
What my baby looks like inside this week: 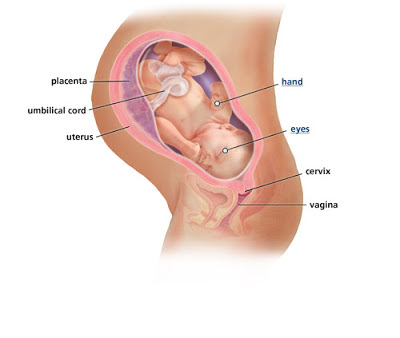