30 Years of The Snowman

I am a certified Christmas fanatic and have been known to get into the spirit months before Decemeber rolls around so it will be of no surprise to my readers that I have already started watching Christmas films and listening to festive tracks. Luckily for me I have the perfect excuse as the much loved family Christmas film The Snowman is being re-released this year to celebrate its 30th anniversary! 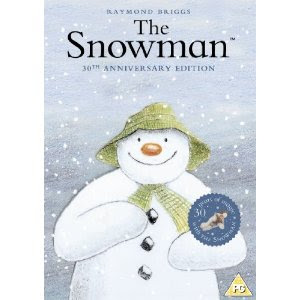 I was lucky enough to be sent a copy of the DVD to watch with Cameron prior to its release on 5th November. Cameron is actually pretty fussy with what he watches at the moment and won't just sit down for any old cartoon so I was interested whether he would enjoy this festive film as much as I did when I was younger (and, let's face it, now).

Cameron watched the entire film from start to finish without moving, a record for him and once it finished he asked me to put it on again, and again. After five times of watching it I must admit I was getting a little bored, but Cameron was still loving it and now recognises the lead character, the snowman when he sees my copy of the press release hanging around. He calls the snowman 'man' or 'bear' rather than snowman, but I think he gets the concept and really enjoys watching the snowman and little boy enjoying their magical evening and trip across the skies.

On a more adult note, I was really interested in the additional bonus features of the DVD, especially the feature where you can see how the film was put together. I think my brother would be even more interested as he is currently studying animation at University in Newcastle.

For anyone who hasn't seen this classic Christmas tale before I would definitely recommend watching it. Like a lot of families, we like nothing more than getting together around Christmas time and bonding over Christmas TV and films and this special edition will definitely be a part of Christmas this year. If you would like to purchase the film, it is available from 5th November 2012, rated PG with a running time of 26 minutes and retails at £6.99 for the DVD and £9.99 for Blu-Ray. There are also 35 minutes of special features on the special edition disc.


Disclaimer: I was sent the press release and special edition DVD to review on my blog, however, I was not paid for this and it has not affected my opinion which is both honest and accurate.
thought up by Emma-Louise at 4:58 pm
Email ThisBlogThis!Share to TwitterShare to FacebookShare to Pinterest
Labels: 30th anniversary release, Blu-ray, christmas films, DVD, family, family christmas films, special anniversary edition, special features, The Snowman, The Snowman special anniversary edition