"Many women start to notice a tingling sensation or numbness in the pelvic region or pain as they walk. This may be caused by the pelvic joints loosening, ready for labour. If you're in pain or hips are sore, mention it to your midwife or doctor and check out our self-help tips".
What I feel this week:

I have been suffering from pelvic girdle pain for the last couple of months so am no stranger to that pain but lately I have also felt a kind of scratching sensation right down below and think it might be her head engaging (although as it is my second baby apparently this can happen and the baby still come back out of position again before labour). I have also started waddling when I walk and struggle to get up from lying down or sitting down. I really am beginning to resemble a whale! My bump definitely seems to have dropped down a bit over the last week and I can breathe a bit easier. Although movements aren't as constant, my baby girl does still move a lot, more than I can recall Cameron moving , and she makes me gasp sometimes with the strength of her kicks! There's now only 3 weeks until I'm full term, 6 until I am due and I can now say that I will have a baby either this month or next, exciting!

"Your baby now weighs more than 2.2kg and is 45cm from top to toe. She's filling out and getting rounder – she’ll need her fat layers later to regulate her body temperature once she's born.
If you don't already talk to your baby, this is a good time to start – at 35 weeks her hearing is fully developed. Don't feel ridiculous if you're already chatting in baby talk. Some evidence shows that newborns pay closer attention to high-pitched tones.

If you've been nervous about going into premature labour, you'll be happy to know that 99 per cent of babies born at week 35 can survive outside the uterus (womb) – and most have no major problems. Although your baby's central nervous system is still maturing, her lungs are nearly fully developed by now". 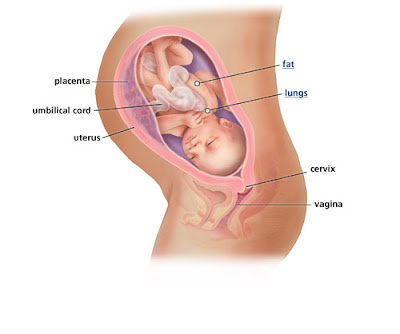 
thought up by Emma-Louise at 10:31 am
Email ThisBlogThis!Share to TwitterShare to FacebookShare to Pinterest
Labels: 34 weeks pregnant, babycentre, pregnancy updates, weekly pregnancy update