"You've probably gained weight this month, somewhere between 1.3kg and 1.8kg. Gaining 450g a week is quite normal during the last trimester as your baby has a final growth spurt before he arrives in the world".

What I feel this week:

I have been weighing myself every so often, mainly when I am having a 'fat day' and feel the need to know just how much weight I have actually gained. Luckily, despite the raised fluid levels, I haven't been gaining too much weight. I have had a pretty hectic week with a consultant appointment on Wednesday which then led to glucose blood tests on Thursday. They have fortunately been able to rule out gestational diabetes as a cause for my raised fluid levels, but I am still awaiting results on a blood test for possible infection. If that comes back clear as well then there is no apparent cause for the raised levels. I have another appointment with my consultant booked for next week as well as another scan to check growth etc. I am trying to relax and forget about everything in the meantime. On Wednesday evening I had my firstg antenatal class which, although I already knew most of the stuff they covered, was good fun and allowed me to feel closer to the birth and meeting my baby! I have one more class this week and then a couple of relaxation classes in mid October when I will be approaching full term, exciting!

"Your baby weighs about 1.5kg and looks more than ever like a newborn. He measures about 41cm from crown to toe. His arms, legs and body continue to fill out – and they are finally proportional in size to his head.
You may notice your baby isn't moving around as much. That's because he's just running out of space in your uterus (womb). As long as you can feel him squirming and kicking, you'll know he's just fine. Believe it or not, he still has plenty of growing to do. You can expect him to gain at least 900g before birth.
Your baby's organs are continuing to mature and he is passing water from his bladder, which is good practice for the weeing he'll do after he's born. Also, the marrow in his bones has taken over from his liver the job of producing red blood cells". 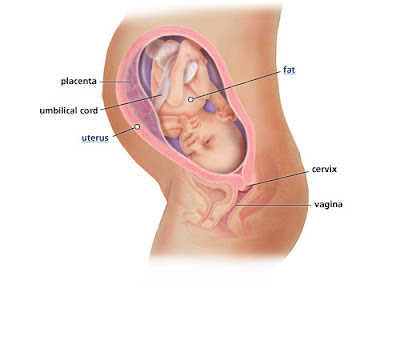