In my last pregnancy I really, really wanted to have a 4d scan, after seeing photos of a friend's. There was no way I could afford it, which was disappointing. This time round I knew early on that I wanted to make sure I could have a scan with this baby and luckily my fiance very kindly said he would pay for the scan, which we booked just after our 20 week NHS scan for when I was 29 weeks and 5 days pregnant. This was just within the time frame for best results, and also gave us a scan in between the 20 week one and my due date. I shopped around online for the best deals with private scan clinics and we opted for Babybond, our local clinic being 40 minutes away in Southampton.

On the day of the scan I was so excited, but this was kind of overcome by nerves. I had a scare over the weekend after a massage where the women pressed on pressure points that could have triggered early labour, so the scan came at a good time to reassure me that everything was ok but made me extra nervous beforehand. I was also convinced that we would go into the scan and be told that we were having a boy, not the 95% girl we had been shown at our 20 week scan. Although I would have gotten around to the idea and obviously loved a boy just as much as a girl, it would have been so frustrating to have to take back the piles of clothes and pink accessories I have slowly been buying over the last ten weeks!

We got to the scan clinic 40 minutes early as I always allow for things to go wrong and traffic, but we were shown into the waiting room which was lovely, filled with magazines, a snack table along with plenty of hot and cold drink options and a play area for young children (making me realise I could of taken Cameron after all!). It was a totally different experience to an NHS scan, as you would expect for the money you are paying. I was made to feel really welcomed by the sonographer, who came and talked with us a bit before setting up. We were shown into the scan room which was really relaxing with soft music playing in the background. There was a massive screen for us to view the scan on, and the bed I was laying on was so comfy I could have fallen asleep on it!

First of all we were told about what the scan would involve and asked whether we wanted to know the sex. I was assured that they would be able to confirm the sex later on in the scan but to begin with we had the '4D' element of the scan, looking at the baby's face from different angles and seeing her smile and move her hands in front of her face etc. I couldn't believe how clear the scan was!


It was such an amazing experience and one I will never forget. I think she looks just like Cameron, which will be lovely! I am really excited to meet her now I have had this scan. After this we then switched to a 2d scan and the sonographer looked over all the vitals to check everything was ok and then took some measurements where she was able to tell us that the baby currently weighs 3.5 pounds with an estimated birth weight of 7.5 pounds. She also had a look for the gender and showed us exactly where everything was and said that she could say 100% that we are having a baby girl, which was a huge relief and put a massive smile on my face. 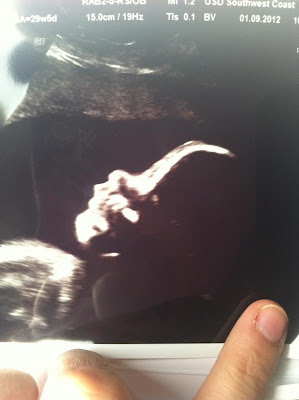 The scan continued for a bit and sadly she did find that my fluid levels are abnormally high for my gestation, which could mean a difficult and monitored birth. For now not much can be done, apart from seeing a consultant, which I am doing tomorrow, and possibly regular growth scans to check the baby is growing well and not distressed by the fluid, and to see if the fluid is increasing. I am pretty worried by it all but trying to take comfort in the fact that the baby is nice and healthy and is the right size etc.

For anyone thinking about having a 4d scan I would highly recommend it. For me it was an amazing experience and one I will never forget. For £139 we got a relaxed, friendly atmosphere for our 45 minute long scan, we came away with lots of black and white images from the 4d and 2d scans as well as our chosen image in colour. We also got a recording of the 4d section of the scan, complete with the relaxing music we heard during the scan. It might seem expensive, but for that reassurance that everything is going ok in between the 20 week scan and the birth, as well as a chance to get a sneak peek of what the baby is going to look like, I think it is more than worth it and I will definitely have a 4d scan if I have more kids in the future.
thought up by Emma-Louise at 11:28 am
Email ThisBlogThis!Share to TwitterShare to FacebookShare to Pinterest
Labels: 4d scan, babybond, babybond southampton, bonding scan, gender scan, high fluid levels, predicted birth weight, private scan