I have been more than a little paranoid this pregnancy. In the beginning I had bad cramps which resulted in a couple of early pregnancy scans. I thought this would help make me relax but instead things just got worse and by the twelve week scan I was hugely nervous, convinced something would be wrong. Seeing the baby again and being told the baby was low risk for Downs Syndrome made me relax for a bit but the eight week wait for the next scan resulted in my paranoia returning.

At fifteen weeks I found a fetal heart doppler on Amazon and decided to buy it. It cost £25 which was a lot less than others I had found online, and had lots of amazing reviews. 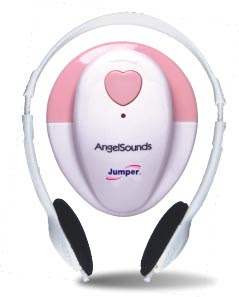 When the doppler came in the post I opened it up and the first thing I noticed was that the product is from China and the instructions are written in very bad (very amusing) English. You can make out what they are saying but don't take them too literally, some things have gotten lost in translation! Even though I was still a few days short of fourteen weeks, when the box tells you it is possible to detect a heartbeat from, I decided to try anyway. This was my first mistake.

I got seriously frustrated and tearful when I was unable to find my baby's heartbeat despite trying for ages. In the end I gave up and waited another week. When I still couldn't find a heartbeat I became very worried, but forced myself not to panic. Luckily I then had a midwife appointment where they found the heartbeat straight away, telling me it was very strong. A few days later I finally managed to find the heartbeat on my own and from then on have listened to it once a week or so.

It is great at putting your mind at rest if you are prone to panicking, my only advice would be to leave it until around sixteen weeks to make it easier to find a heartbeat and to use plenty of ultrasound gel (also, make sure you buy some more online as the bottle they include with the doppler is miniscule!).

Some people are wary about using these dopplers at home as apparently some women find it hard to tell whether what they can hear is their own heartbeat or that of the baby. If you have had your sixteen week midwife appointment, they should have listened to the heartbeat then so just listen out for the same sound (like a train chugging along, a lot faster than your own heartbeat).


I still use the doppler from time to time, although now I am able to feel the baby kicking and even see her movements, I find I am using it less often. For £25 I don't feel I have wasted my money for those weeks when I didn't have this tangible sign that things were ok, to have that reassurance was totally worth the cost.

Rating: 4/5
This doppler is pretty easy to use, cheaper than a lot of other similar products and is able to put your mind at rest whenever you need reassurance that baby is ok in there. I would recommend it to anyone, just remember that a heartbeat is not always easily found until later than the box states!

Have you ever used an at home doppler? What did you think of it?