Anyone who knows me will know that my iPhone pretty much never leaves my side so it was inevitable that before long I would go searching for pregnancy related apps. 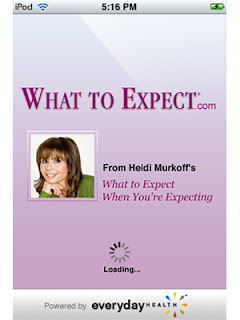 I have had most of these apps from before I even announced my pregnancy, and they were a great comfort for me when I had nobody to talk to. Here are my favourite pregnancy apps.....

Pregnancy App by The Smile Factory £1.99 (there is a free version)

This app was the first one that I downloaded. I don't seem to use it very much since getting later apps that do the same thing but more, however, I like the simple to navigate layout of this app and it is really nice how the welcome message changes each time you go on the app and calls you by name. The app allows you to see how far along you are in your pregnancy and gives weekly updates on how you and your baby are developing. There are other functions which I have yet to use such as a contraction timer and kick counter, which I might use when relevant. There are some functions that I won't be using as I don't really need them such as the lists on signs of labour and when to call the doctor, but these would be useful for first time mums. The size visualizer tool is a great idea as it shows you the fruit that your baby is the size of, giving you a better idea of how big it is each week. There is a photo gallery where you can upload your bump photos each month as well as the option to send in your photos to be featured in the users bump gallery, which is quite cool. One of the best features of this app, especially in early pregnancy is the personal diary where you can write about your thoughts, feelings and symptoms whenever you want, even giving you the option to upload directly to Facebook , Twitter or an email address if you wish. I would never have thought to keep a pregnancy diary but started writing on the app and ended up copying it out into a notebook and then keeping up writing in this every so often throughout my pregnancy. It will be such a nice memento and something to look back on after I've had the baby.

What to Expect Pregnancy Tracker FREE

I was a bit wary of this app as I am not keen on the What to Expect range of books, finding them too heavy going with a distinct lack of pretty pictures (yes I know how that makes me sound!). This app, however, is great and has fast become my go to app for my pregnancy. Similar to the pregnancy app, this one shows you a weekly update on how your pregnancy is progressing but even better, this one also shows you a daily update as well. This is great when you are like me and literally counting down the days! It also has a welcome page stating how many weeks and days into your pregnancy you are each time you go onto it, as well as telling you which trimester you are in, what fruit your baby is as big as, a countdown to your due date and a reminder of when that due date is. The app also has a place to upload your bump photos weekly, something I haven't been taking advantage of as I have been instead uploading them to an album on Facebook. There are a whole host of forums on the app but I have avoided these as they mostly seem to be targeted and used by American users, making them less relevant for me.

My Pregnancy Today by Babycentre  FREE

This app is great. Like the previous two, its primary use is as a daily and weekly update of the pregnancy. As it is made by such a well know pregnancy site, it has the added bonus of linking you directly to the site enabling you to read expert advice on a variety of topics, as well as a link to the popular babycentre community. Unlike What to Expect, this app is focused on British pregnant women which makes it more relevant to my own pregnancy. This app has a handy checklist of things to do in the lead up to your due date including regular prompts to take a belly photo, visit the dentist, drink lots of water and do your pelvic floor exercises as well as bigger milestones such as writing your birth plan and packing your hospital bag. The daily updates on the pregnancy and great and this app is unique as it shows you video clips and pictures of the baby in the womb as well as information.

This app is great for those finding it difficult to think of a name for the baby. It has a huge variety of names and even lists them in handy themes such as Bible names, Celebrity baby names, Flower names and by origins. You can either search for both sexes or just boy or girl names if you already know the gender. You can also look up a specific name and its meaning using the app. When you find a name you like, there is a favourites section which you can add your names to and review them whenever you want.

This isn't strictly a pregnancy app but it can be used to countdown to any event. I have put in a countdown to my 20 week scan (now only an hour away, eek!), Disney holiday and of course the baby's due date. It's great to be able to see quickly just how long I've got left to wait. You can also add photos to the background of your countdowns and have more than one countdown on the go at any one time.


thought up by Emma-Louise at 1:31 pm
Email ThisBlogThis!Share to TwitterShare to FacebookShare to Pinterest
Labels: baby names, babycentre, countdown, iphone, iphone pregnancy apps, pregnancy apps, what to expect when you're expecting