On Monday afternoon I had my twenty week scan. I had known since finding out I was pregnant again that I would be finding out the sex at this scan if the baby let me and focused on that aspect of the scan rather than worrying about what could be wrong. That was up until the morning of the scan when I was suddenly terrified of all the things the scan can pick up.

It was torture waiting around most of the day to go for the scan but finally the time came round and I went to the hospital with Cameron and my boyfriend who had managed to take the day off work. We were also lucky to be given permission to film the scan for the BBC3 show that I am involved in, which is really nice as it means we will always be able to look back on the scan.

The sonographer did loads of checks and measurements of the baby and told us that she couldn't find any problems with the baby and it was healthy which was great and felt like a huge weight had been lifted. She then had a look for the sex of the baby and I was totally shocked when she announced that we are having a baby girl! I had been so sure that I was carrying another boy that I asked her to double check! 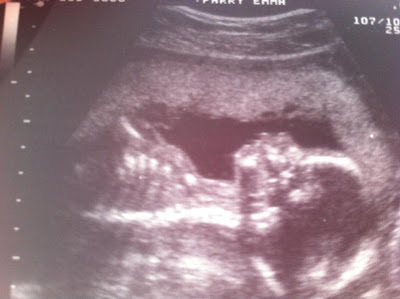 Although it was a shock, I am over the moon. It is amazing to be having a baby girl as it means I will have one of each. I would have been very happy with another boy but it has been so lovely to be able to go shopping for pink things (a post on all the pretty things I've bought in the last couple of days to follow!).

We had discussed names prior to the scan and had one that we both liked, although I wasn't overly sure about it so we didn't announce a name right away. That night I was sat with Cameron on the settee and told him that he was having a baby sister. He came over and stroked my bump, something he does often, and said baby. I asked him what we should call the baby and he said something which made me think of the name we have now chosen (I don't want to announce it to everyone until the birth). I think it is so lovely that Cameron helped to name his baby sister. It will be something to tell them both when they are older!