I'm sure I have mentioned my annoyance about a lack of magazines aimed at young mums before, but just recently it has come to light just how bad the situation is. Before I had Cameron I used to read all the monthly glossy magazines aimed at women in their early to mid twenties such as Cosmopolitan, Glamour and Company. I also bought More! magazine weekly and continued to do so even once pregnant the first time round. 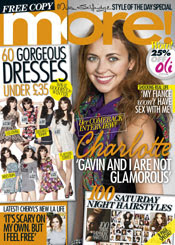 Despite not really catering for its pregnant readers, the More! team were great at interacting with their readers through their very popular Facebook fan page, which soon became my haven as my pregnancy progressed and I became more and more bored at home over the summer. Through the page I met quite a number of other young women from all across the UK, including some mums and fellow mums to be. It was great.

I managed to take part in a few features through the magazine including having my fashion dilemma answered by Gok Wan. I was impressed that More! were willing to have a pregnant fashion question featured in their magazine as most magazines aimed at young women avoid talking about pregnancy in any way shape or form (the main reason I stopped buying the monthly magazines much after finding out I was having a baby).

After having Cameron, I was given the amazing opportunity to blog for More! on their website for three months. It was great to be given that platform to talk about how I felt about everything, and I was seriously impressed that More! actually wanted me to talk about how it felt being a young mother in her last year of her degree. After finishing writing for More! I continued to write my own personal blog (clearly, or you wouldn't be reading it now!) and wasn't afraid to speak my mind when things got on my nerves. My relationship with More! continued to go well and I even won the chance to be a 'superfan' of More! and help out on their fan issue of their magazine, going up to London to meet the team and spend the day working at their offices. I had already got to know one of the editors Laura whislt blogging for the website and it was nice to be able to put a face to a name.

After that I continued to keep in touch with More! on their Twitter page, and even arranged to do Work experience in London after a career plan change towards the end of last year. It was at this point that I was approached by one of the writer's from More! about an article they wanted to write about my pregnancy with Cameron and finding out that his dad was not my ex but someone I had a rebound fling with after we had split up. Trusting More! due to my previous links with them, I agreed to the story and was confident it would come across in a good light as I had it read back to me over the phone before it was printed and was assured nothing would be changed from what I heard at that point.


When the article ran, I was annoyed and upset to find that not only had the content been changed from what I had been read, with quotes taken out of context and added text that made me sound like a bad mother, but the magazine had also stated that Cameron was a product of a one night stand (not true) and generally made me seem like someone who slept around. I was so angry at the magazine and its staff that I immediately stopped buying the magazine and I also didn't attend the work experience I had previously arranged with them.

For months I didn't read an issue until recently I was intrigued by their makeover, which had been getting huge amounts of negative reviews online. I actually think the content has been improved by the makeover, it was pretty childish beforehand and now seems more mature, and I have bought a couple of issues recently. However, More! and the monthly magazines I mentioned at the start of this post, still refuse to even acknowledge that some of their readers will be pregnant or have children. It is not uncommon for women in their early and mid twenties to already have a family, so why is the magazine industry totally cutting us out of their demographic?
You might be thinking, why not read pregnancy magazines instead? Well I do, and I generally enjoy them, even if I do have to skip past most of the fashion pages as the clothes featured would be better suited on someone my mum's age (she's nearing fifty....). In fact I was quite happy with reading these magazines up until a couple of weeks ago when I was told something that hugely upset me. 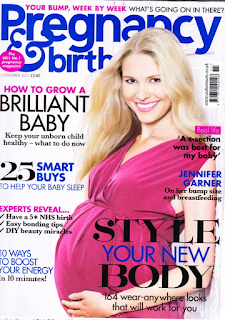 I was answering questions to appear in a feature in an upcoming issue of one of the top pregnancy and birth magazines when the features writer emailed across asking me my age, location etc to add to the piece. I told her and immediately got a reply back asking if it would be possible for her to change my age to either 24 or 25 because 'the editor doesn't like featuring women below 25 as the magazine's demographic is between 25 and 35'. I agreed to the age change but cannot believe that this is necessary. I am twenty three years old, not exactly even fitting into the young mum age bracket, and yet I am being told that pregnancy magazines don't want me as a reader? What exactly are mothers my age meant to be reading when the magazines that are targeted at our age range won't even talk about pregnancy, birth and all that comes afterwards and those magazines that are willing to talk about these topics don't want us involved?

Lately I have been noticing the divide more and more. I often email writers to get involved in features in magazines after seeing about them through Twitter. In the last couple of weeks I have been ignored by three magazines when emailing in about taking part in features they actively ask readers to be involved in (Cosmopolitan's couples feature and More! magazine's beauty feature being two such articles). I was then approached by a writer at Cosmopolitan herself, asking me to take part in a feature she was putting together on real couples and their sex lives. I replied quickly saying I was interested but asking whether it was ok that I was pregnant. I got a reply saying that whilst it was fine that I was pregnant, I needed to be living with my boyfriend to take part (something she had not only previously failed to mention but one of her questions had even asked whereabouts and with whom we lived with, suggesting she wasn't only looking for couples who were cohabiting, but simply using this as an excuse). 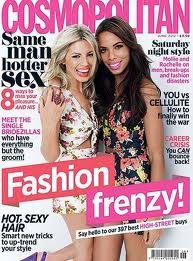 I am lucky enough to be taking part in a BBC3 show based on young parents and I hope that through this I can show some of the problems faced by young women who have children relatively young. If I had enough money and power then I would definitely start up a magazine aimed towards younger mums. I have been pointed in the direction of such titles as Gurgle and Junior, but having read these once I failed to find them as interesting and worth the money as their rivals, and to be honest I still don't feel they are aimed at mums like myself.

For now I shall continue to bitterly moan on about being left out in the cold by magazines, occassionally giving in and purchasing a glossy only to then bitch about it when it fails to include any relevance to my life. Maybe one day in the future Cosmopolitan might pause in their many campaigns and consider starting one on including those of us who have had a baby.... Just a thought...
thought up by Emma-Louise at 8:20 pm
Email ThisBlogThis!Share to TwitterShare to FacebookShare to Pinterest
Labels: cosmopolitan, Glamour magazine, magazines, more magazine, parenting magazines, pregnancy and birth, pregnancy magazines