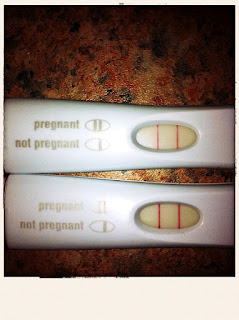 As this pregnancy was planned I assumed I would be able to tell that I was pregnant as soon as it happened. However it was actually my mum, who knew I was trying, who first said she thought I could be pregnant as I had been having some pretty strong mood swings and getting more tired than usual. I didn't quite believe it though so was still shocked when I took the pregnancy test and found out I was indeed carrying baby number two. With Cameron as he wasn't a planned pregnancy, I had no idea I was pregnant to start with and the first thing that made me think I could be was my missed period.

There are all kinds of different early pregnancy symptoms to look out for and Liz Moore, a midwife from HiPP Organic has given some advice and answered some common questions about early pregnancy:

"Your pregnancy is calculated from the first day of your last period and lasts around 40 weeks. Fertilisation of the egg is generally considered to be around 2 weeks after the first day of your last period, so you are likely to actually fall pregnant around the beginning of the official ‘week 3’.
Missing your period is the first sign of being pregnant. However, there are other reasons for a missed period such as stress, illness, extreme weight loss or gain, coming off of oral contraceptives.
The best way to confirm your pregnancy is by taking a pregnancy test. Human Chorionic Gonadatrophin is a hormone produced by the developing placenta and can be detected in home pregnancy tests from around the time of a missed period.
Other signs of early pregnancy include:
Is bleeding at the start of pregnancy common?
Some women believe they have had an early, light period which is in in fact an implantation bleed. Implantation bleeding is vaginal discharge which contains a small amount of pinky or brownish blood caused by the fertilised egg and sperm embedding in the uterine wall. It can occur 6-12 days after ovulation. Only 1/3 women experience this.
When should I start taking folic acid?
If you are hoping to become pregnant, or suspect you may be pregnant, remember to take a daily 400mcg folic acid supplement (and continue it until you are 12 weeks pregnant). Folic acid helps to reduce the risk of neural tube defects such as spina bifida.
When should I see a doctor?
If you have taken a positive pregnancy test, book an appointment to see your doctor to confirm the pregnancy and find out about antenatal care. You will have your first antenatal appointment with the midwife between weeks 8 and 12. If you haven't already checked to see if any medications that you are taking are safe to continue with during pregnancy, now is the time to do this".

Thanks to HiPP Organic for providing the information for this Blog post.