I feel like I haven't posted about Cameron in months, bad mummy... 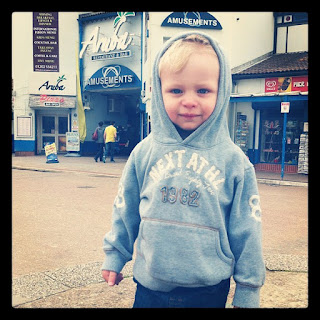 He has grown up so much in the last couple of months, he is no longer my little baby but a proper little boy! He's now 20 months, not much longer until he turns two!! He has been talking for almost a year but he only recently started saying lots more words, chatting to people and himself all the time and stringing words together to start making sentences. His favourite words at the minute are: mum, nan, dad-dad, car, milk, juice, please, ta, night night, bye and my favourite and his most recent: love you! I seriously could not be happier with his progress and I am so proud of him. 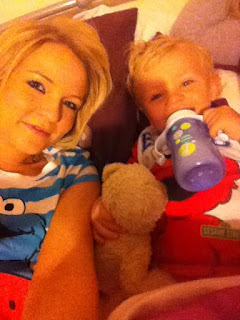 He is such an affectionate litlle boy and he will happily come and give me cuddles especially when I've had a tough time with pregnancy hormones and am in tears. He is great at taking his afternoon naps now as well and will voluntarily go and get into bed and go to sleep for a couple of hours which gives me a lovely rest as well.

I want to start looking into him going to nursery for a couple of days a week once he turns two, not because I need him to but because I feel it would be good for him as he still doesn't socialise with other children very often and I want him to be confident when he starts going to preschool etc. He loves his second cousin Spencer who has just turned three and follows him round and plays with him whenever my aunt is down to visit. 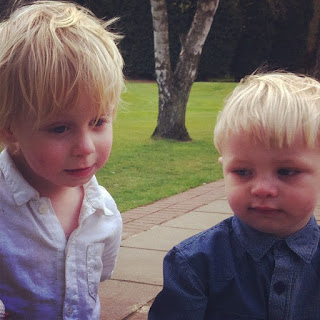 Cameron is on the verge of potty training now. He is in pull up nappies which he takes off when he has done a wee and he has even managed his first wee on the grown up toilet (it would seem he has skipped the potty in favour of using what the grown ups use). I would love for him to be out of nappies by the time the baby comes so it is great that he is showing signs that he is almost ready now.

thought up by Emma-Louise at 3:21 pm
Email ThisBlogThis!Share to TwitterShare to FacebookShare to Pinterest
Labels: baby, Cameron, nursery, pregnancy, preschool