My Take on Eurovision Song Contest 2011! 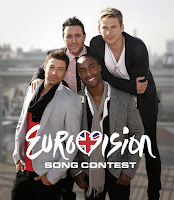 I always watch the Eurovision Song Contest with my mum without fail (though a couple of years I was at my dad's but was on the phone to her!). We love the cheesiness of it and bitching about the acts. This year I have had to revise at the same time, but managed to write a short review of each act:

01. Finland: Liked it, thought it was a shameless ploy for votes with the saving planet theme but was a catchy song and guy seemed likeable
02. Bosnia: first impression with the yodelling, uh-oh, but then, became weirdly catchy! Reminded me of music you hear when abroad from random little bars.
03. Denmark: Very Take That..... and I can't stand Take That..... enough said!
04: Lithuania: Elegant setting and dress... was a little depressing for my liking and not overly amazing voice.
05: Hungary: Woman looked a bit manly.... dress was AWFUL! Singing was ok, got catchy in the chorus (but singing got worse). Message in the song was relevant to me so I liked that aspect.
06: Ireland: Well... what can I say...It was Jedward..... hmmm... I think I had forgotten how crap they were from first time round... just pure awful!
07: Sweden: Not great, kind of passed me by for being just another boring 'pop' anthem...
08: Estonia: Radioactive outfits, alright song... a little too cheesey for my liking!
09: Greece: Scary intro! A bit too loud but it got better throughout...
10: Russia: Reminded me a little of 80's pop music, which isn't necessarily a bad thing for me at least... I liked it better than a few of the others anyway..
11: France: Reminded me of something from a West End Musical, including the weird haired singer and his strange outfit.. Was an ok song, just not my thing
12: Italy: A bit of a Michael Buble! Alright on the eye and had a nice accent... Song was a little boring though...
13: Switzerland: The song seemed too old for her, as did the dress actually... and dancing.. a bad english accent didn't help either! Siunds like an old fashioned (notice a theme) song that you would hear your mum listening to... not my thing at all...
14: UK: erm... first off, why the huge pics of their faces? Also, very poor voices.... powerful music but singing was too weak, could barely hear them sing... had a familiar Blue feel to it but just wasn't enough to get anywhere, not surprisingly to be honest!
15: Moldova: hmmmm... energetic, but just awful singing! Reminded me of that song, Pretty Fly for a White Guy, and I didn't like that song apart from to laugh at it... Also, what is UP with the weird outfits? were the costume designers high?
16: Germany: Actually quite liked this one. Sexy singer... and good outfit.. Catchy lyrics too. A favourite so far.
17: Romania: Very familiar backing track! Not too amazing. An ok effort.
18: Austria: Very boring start but built up and I started liking it. Quite a slow song, seemed a little Disney ballad..
19: Azerbaijan: Loved it until the man started singing! Liked the girls' outfits... quite nice lyrics but guy's singing kind of ruined it for me.
20: Slovenia: A little boring... Nothing special and hated her outfit!
21: Iceland: Too weak singing. Very Take That in outfits and song style. Disliked it and it's cheesy message....
22: Spain: Catchy... found myself humming along to it as wasn't watching properly, the sign of a good Eurovision song. Nice, easy dance routine to learn too... and all tropical background making me want to go abroad!
23: Ukraine: Too whiny! And she looked like she wanted to be a bird lol...
24: Serbia: Sounded like a song from Hairspray! Looking at the dancing it may actually be that song but in a different language.... :S Too happy clappy and psychodelic background/outfits etc.
25: Georgia: Shouty, angry girl music which I was not in the mood for. Also, her dress was tacky and not a nice colour at all! Not a great end in my opinion.

So there you have it, my run down of what the songs were like... The results, in my opinion, will show all the political tactics as usual so I don't really watch that bit.. (I want Germany to win!)

If you watched it, who did you want to win? Who did you cringe at the most?

thought up by Emma-Louise at 10:02 pm
Email ThisBlogThis!Share to TwitterShare to FacebookShare to Pinterest