I keep meaning to join groups for mums and babies as I feel I should socialise more with other mums in the same position as me and also I should allow Cameron some more interaction with other babies as he loves spending time with them but rarely sees other babies. 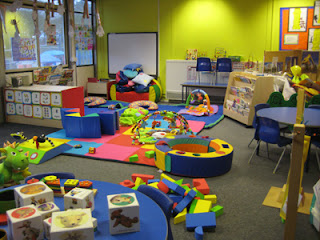 I looked online the other day and found that my local sure start centre had a group for young mums (aged 16-24), falling into that age bracket (just), I thought it would be a great place to start as I sometimes feel older mums judge me for being a 'younger mum', and I worry we might not have so much in common....

I was a little nervous as I can be shy with new people, but these people were so lovely I settled right in and joined in their laidback conversations. I really enjoyed the whole experience and will be going next week and hopefully reguarly after that.

It cost a pound, but this covered drinks throughout and a 'tea' at the end for both mums and babies/kids. It was a buffet style of sandwich things and fruit and veg which was lovely. Cameron had some strawberries which he loves and some of my roll as well. Cameron really loved the experience and happily played with all the toys and made a little friend, a girl who was born only a day after him! Was so adorable to see them interact.

I really liked a few of the other mums too, though actually, the ones I spoke to the most were actually older! They were in their early thirties, one helped run the club and the other had just come along with her younger friend. Just goes to show that you can't stereotype people.

I loved the experience and cannot wait until Wednesday when we go again, and this week a nursery nurse is coming in to do baby massage! I would highly recommend attending a mum and baby group to any mums out there. I plan to try out some other groups too now I know how great they are!

thought up by Emma-Louise at 11:51 pm
Email ThisBlogThis!Share to TwitterShare to FacebookShare to Pinterest