30 Day Photo Challenge: Day 16 - A picture of someone who inspires you 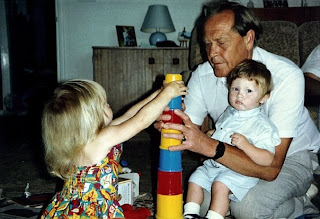 My grandad, Alan who sadly passed away 10 years ago when I was 12.

I have so much respect for him and how he handled the last few months of his life especially. He had depression for many years, after he lost one of his sons who was only 21. He became hooked on anti-depressants, which has put me off going on them when I have been depressed. When he was diagnosed with cancer, it gave him the shock he needed to stop taking them and he actually became happier in himself in a strange way as he knew he had to make the most of the time he had left. The way he dealt with his illness inspired me to take every opportunity in life, make the most of every day and to never have regrets. That is the reason behind my first tattoo and I aim to make him as proud as possible while I am on this earth until we meet again.

thought up by Emma-Louise at 8:59 pm
Email ThisBlogThis!Share to TwitterShare to FacebookShare to Pinterest