Our First Trip to the Oceanarium!

I have started taking Cameron swimming each week, but woke up today and felt a little unwell so decided instead to take him somewhere a little more fun for him and where I wouldn't have to get undressed! Cameron's daddy and I looked at the options online and he seemed to really want to go to the Oceanarium as he hadn't been before (I hadn't either, but wasn't as excited as he was!). So I got Cameron all ready and we met his dad in town.
﻿
﻿

﻿ ﻿
The Oceanarium is literally on the sea front in Bournemouth, so Cameron got to see the sea at the same time! To begin with Cameron wasn't sure what was going on and didn't seem too interested but, after a few tanks,﻿ ﻿

﻿﻿ he got into the whole experience and began staring at the pretty fish! He liked the pretty coloured ones the best and seemed in awe of the really big ones we saw! Cameron's favourite part was the darkened walkway where he saw some pretty scary looking crabs (I was scared, Cameron loved ﻿ ﻿
﻿
﻿
﻿﻿them!). He started really trying to talk to them and was babbling non-stop to the tank! Another really good part was the walk-through tank with the sharks, though I think me and is dad enjoyed that more than him! I was a little freaked out by a lot of the fish we saw, especially the Pirahnas, crabs and sting-rays!
﻿ ﻿

When we finished in the﻿ ﻿Oceanarium, we went to the gift shop and his dad bought Cameron a little cuddly toy stingray which I have creatively named 'Ray'... 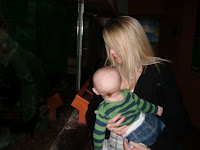 We went for a walk along the pier as it was open which was really nice. It was a little cold and windy so we ﻿ ﻿
﻿﻿made sure Cameron was wrapped up warm. It was nice for Cameron to be spending time like a family and he seemed to have fun looking out to sea. He fell asleep having his bottle at the end of the pier so we took it in turns to carry him into the town centre so﻿ ﻿ ﻿﻿ I could get him some more baby food from the shop. We walked through Bournemouth Gardens which was nice as well. By the time Cameron and I got home we were both shattered and, after some more milk, Cameron fell asleep for a while and I watched Look Who's Talking with my flatmate, Abi.

We had a really good day! :D
thought up by Emma-Louise at 5:42 pm
Email ThisBlogThis!Share to TwitterShare to FacebookShare to Pinterest