So, as those of you who have read my previous post on being anti-valentines day will know, I do not go in for all that romantic crap and this year I don't even have a boyfriend so I wasn't really expecting to get anything yesterday.
I had planned the week before to spend the evening with one of my best friends, Sealy, but had such an awful day that by the evening I was exhausted and not really feeling like doing anything. I was also feeling pretty rubbish due to lack of sleep, but also as everyone apart from me seemed to be in a relationship, and the day seemed to have been planned to make single people feel rubbish about themselves! My mum picked Cameron up at half 7 and Sealy arrived just afterwards. I made us fajitas and she gave me a long stemmed pink rose and a bottle of rose wine. I wasn't expecting to get anything, so it was really lovely.

The fajitas were so nice and we put on a nice jumpy film: The Skeleton Key, and had a couple of glasses of wine. Sealy had Uni early today, so she left at around 10pm and I hung around the flat, watching Glee and sobering myself up (I had only had 2 glasses but I was so tired that it really affected me). 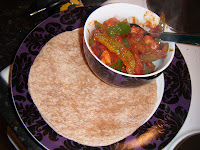 I left for my mums, where I was staying, just after 11pm. The journey is only 5 minutes by car but I somehow managed to take a wrong turn and get lost in the rain! I was too scared to keep driving round and round the area as I was worried about the alcohol. So, instead, Cameron's daddy ended up coming to rescue me! I felt so stupid when he found me straight away and explained that I was literally a couple of roads away from my mum's road! I followed his motorbike back to my mum's, feeling silly.

When I got in, I was very naughty and strayed from my healthy eating plan by eating crisps and chocolate brownie before bed... All in all, apart from being incredibly tired and getting lost in the rain, I had a great Valentines day and one of the best date's I've had that hasn't ended in bed ;)

I hope everyone else had a good day. Just because I don't like the commercialised celebration, doesn't mean I don't want you all to be wined and dined to your heart's content.... <3
thought up by Emma-Louise at 9:48 pm
Email ThisBlogThis!Share to TwitterShare to FacebookShare to Pinterest