What a Difference a Ring Makes....

When I was visiting my dad a couple of weekends ago my brother's fiancee gave me a ring back which she had borrowed a while ago. It only fit on my ring fingers so I ended up putting it onto my engagement finger for the time being and forgot about it. 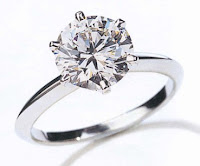 As with my first pregnancy, I often notice people giving me a few strange looks when I am out and about as I look quite young, some say younger than I actually am. Now that I have both a toddler and a bump the looks have, if anything, become harder to deal with. I try not to let anything get to me, after all these people don't know anything about me apart from the obvious. I do take things to heart though, much to the annoyance of my family and boyfriend, and I often deal with how these looks affect me with an aggressive attitude, speaking under my breath about how ignorant these people are and ranting on about it back at home to said family and boyfriend.

Yesterday I was out with Cameron at our local shopping centre, I needed to get a new cleanser and I bought Cameron an Upsy Daisy doll as he has become obsessed with In the Night Garden. Walking along, Cameron holding tightly onto the doll, squeezing her tummy to make he sing, I noticed a large amount of women smiling at us. A few of them even commented on how cute Cameron was with the doll and made small talk with me. This NEVER happens when we are out and about. These women were all in their late forties to sixties and the usual suspect for the dirty looks.

When I got home I was wondering about how strange it had been when I noticed that I was still wearing the ring on my engagement finger. Now I don't know if that is necessarily behind the change in nature from those around me or not. It could have just been a coincidence or maybe these women just all secretly loved Upsy Daisy and Iggle Piggle as much as your average toddler. 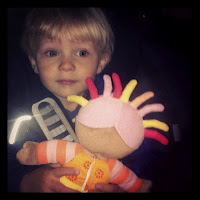 However, I can't help but thinking that maybe, just maybe, the older generation still think that if you are unmarried and have children you are somehow below them. Of course, as I say, this is simply speculation and possible paranoia (after all, I am the person who was positive everyone was looking down on her when pregnant with Cameron apart from the one time I was out with a male friend and I was sure they were suddenly smiling at me). Maybe it is all in my head. But isn't that just as bad, that our society has made pregnant unmarried women feel they don't deserve to be as happy or excited about having a child as their married counterparts?
thought up by Emma-Louise at 12:00 pm
Email ThisBlogThis!Share to TwitterShare to FacebookShare to Pinterest
Labels: dirty looks, engaged or single, engagement ring, in the night garden, married with children, unmarried pregnant, unmarried with children, upsy daisy