I have made these chocolate brownies twice now and both times I have had people telling me how nice they were so I thought I would put up the recipe so others can make them and share the deliciousness! 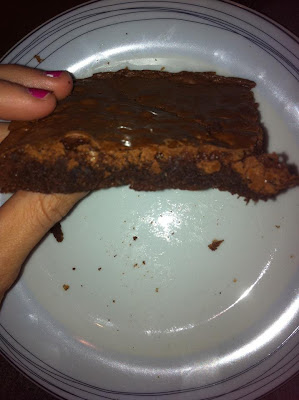 -Melt the chocolate by breaking it into small pieces in a bowl and placing it above a measuring jug filled with boiling water, stirring every so often until melted.

-Meanwhile, place the butter and sugar into a mixing bowl and whisk together.

-Gradually add the eggs to the mixture and whisk to mix. Add the vanilla essence and whisk.

-Add in the cocoa powderm flour and the melted chocolate to the mixture and whisk until smooth in texture.

-Grease and line a baking tray with greaseproof paper and spread the mixture evenly.

-Put into a preheated oven at 180 for 20 minutes until risen. Remove from the oven and leave to cool for 10 minutes until cooled slightly. Serve with cream or ice cream.

thought up by Emma-Louise at 6:29 pm
Email ThisBlogThis!Share to TwitterShare to FacebookShare to Pinterest
Labels: baking, brownies, recipes