Some things I never knew.... 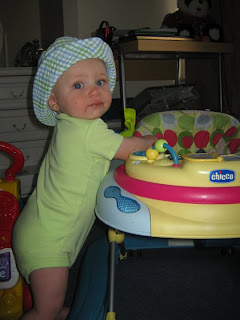 ﻿﻿ 1. They are impossible to keep up with!
Things that people take for granted, like sitting still for two minutes, getting something for lunch, or even talking on the phone become impossible tasks. This results in toned bodies, small stomachs and a lack of social skills if you are lucky, or just feeling plain exhausted and fed up if you're not...

2. Things can get a little messy....
Babies of this age suddenly decide they no longer want to have their nappies changed, resulting in a constant battle with your child to get the old nappy off, them cleaned up and the new nappy on in record time before they end up peeing (or worse) absolutely everywhere! I cannot remember how many times I have seen Cameron's naked bottom crawling away from me mid nappy change in the last few weeks!

3. You will end up exhausted!
The baby that had gotten into a great routine of sleeping through the night way back when they were a few months old (or earlier if you were lucky) has begun waking again in the night, once, twice, maybe even as many as five times... This is not good when coupled with the fact that a 9 month old baby can also get up around 6am each day. The not sleeping so well phenomenon has been put down to increased stimulation of a baby's mind at this stage of development, and also teething as most babies have a couple of teeth by this age. Doesn't stop it being annoying as hell though!

4. Nothing is safe from getting wet...
Following on from the teething is another thing I have learnt. Nothing is safe from the mouth of a 9 month old baby! Cameron's mouth hurts a lot from teething so he likes to put things in his mouth to chew on. He is not fussy what goes in though.. and will quite happily chew on my clothes, the bedcovers, his clothes, his own hand, my fingers, my legs and arms, other people's legs, arms and fingers, the tv remote, my iphone, my car keys... the list is endless. However, he isn't anywhere near as keen to chew on things he can chew on such as teething rings! Strange, strange boy...

5. Even amazing achievements can be tiring!
The joys of  important milestones being reached are shortlived.. soon you will wish back to a time when your baby could not crawl, stand up or walk, having not sat down in....forever... from constantly running after your baby and preventing danger at every turn. You may even become tired of that amazing word 'mum', after it has been repeated around 20 times in a row for no apparent reason whilst trying to do anything other than give your baby your undivided attention. Sometimes mummy just needs to pee in peace Cameron!!!
﻿
﻿
I love being a mum....honest!

thought up by Emma-Louise at 11:02 pm
Email ThisBlogThis!Share to TwitterShare to FacebookShare to Pinterest