I have a poorly little man! 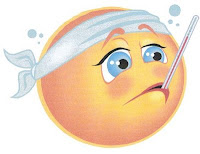 Sorry I haven't been blogging much in the last few days. Cameron had not been himself for a couple of days, being unusually quiet and sleeping more than usual. Yesterday his temperature was up all day and calpol/nurofen did not seem to have much of an effect. By the evening, Cameron's temperature had reached above 39 degrees and he was very lethargic, falling in and out of consciousness and breathing shallow and fast. He seemed spaced out and I decided to phone NHS Direct to see what they suggested we do. The woman on the phone put me through to a nurse and when she heard his symptoms she told us to get Cameron in to our local Accident and Emergency as soon as we could.

We went right away but when we got there, the receptionist was really rude and told us we should be at the out of hours GP rather than there! I was shocked how rude she was considering I was holding my baby son who was on fire! We were given the phone to ring the surgery and they managed to give us an appointment. Cameron was slotted in really quickly as he is still so young. I was really worried by this point, but the doctor put my mind at ease a bit as she was able to diagnose him as having tonsilitis. This had caused him to be sick or gag when trying to eat and drink, and had caused the high temperature. We were told to give him plenty of fluids and to keep his temperature down with regular doses of calpol and nurofen.

When we got outside, Cameron's dad had come to meet us and check he was alright. We spoke to him for awhile and then went back to my mum's where I have been staying whilst Cameron has been unwell.

Today Cameron's temperature has come right back down and he has been much more active. He is still not eating well and not himself, being grizzly and clingy and not knowing what to do with himself, but he is on the mend. Tomorrow he is going to be looked after by his great nan so I am glad he is feeling much better for her!

thought up by Emma-Louise at 8:41 pm
Email ThisBlogThis!Share to TwitterShare to FacebookShare to Pinterest