So lately I have watched a few films as I got some new DVDs for my birthday. I am not going to go into a lengthy review of them but just a quick summary of what the film entailed and whether I think you should go out and watch it yourselves or if it would be a huge waste of your time...

This film was promising from the box but putting it on I soon realised it was quite confusing, seemed to lack much of a plot and I was left feeling a little cheated of the last two hours of my life... It doesn't have much of a plot but basically is about a girl called Tamara who moved away from this tiny village but moves back to sort out her mother's house after she dies, then ensues a strange journey through her relationships with the men of the village as well as some bizarre subplots and the usually yummy Dominic Cooper in a very unattractive rock band member disguise... There is some sex, which if you know me well you will know I like to see in my films, but even that was slightly disappointing and also a little weird (a dream sequence involving said rocky Dominic Cooper and an underage girl!). I would not recommend this film, unless you wish to reach the end of it and go...huh?!

I had seen this film at the cinema when it first came out so I knew that I liked it before I watched it again but I was pleased that I sat laughing most of the way through it as I had been a little worried I had built it up as something it wasn't in my head. If you like the comedy Steve Carrel brings to his roles then you will love this film. He is hilarious in it, alongside his equally funny Co-Star Tina Fey. The comic timing is great and the pair work really well together to make a believable suburban couple who have become stuck in their boring routine of married life with kids. They try and spice it up a little by taking a reservation that was in someone elses name at a top restaurant in the city, which leads to a hilarious series of events seeing them get caught up in a seedy underground world. I loved it and think, if you like films such as 40 Year Old Virgin and Knocked Up then you will love this one too. 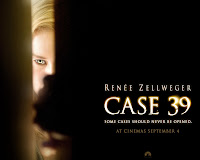 I cannot stress enough how great I found this film! I love horror films and I love psychological thrillers, but often find that the storylines are too similar to others I have watched, or I have become too desentitized to the scariness of the films. This film, however, kept me guessing right up until the credits and I loved not knowing what was going to happen for once! The film is about a social worker whose 39th case at one point in time, is that of a young girl who appears to be being badly abused by her parents... But when she begins to investiagte, and gets closer than she usually would to the girl, she starts unravelling a chilling story. This film has just the right amount of gore, horror and plot twists to have kept not only myself, but my two brothers and cousin on the edge of our seats right up until the end. If you love this type of film, don't mind films making you jump, or you just want to see Bradley Cooper with his top off, this is a great film to watch! Highly recommend it.

This film is the complete opposite to the one before... If it was meant as a comedy horror then I think it served it's purpose as I was most certainly laughing most of the way through... If it was meant to have been taken seriously then I am not a fan! The film is about a guy who was bullied by the popular group at his school. After he kills himself due to their treatment of him, the pupils who bullied him start getting killed off one by one in more and more gruesome ways. I couldn't help laughing at the 'killer', the risen from the dead bullied guy who is a pale grey colour with veins all over him and weird beady eyes. He just was not scary in the least and the whole plot was a little stupid, especially towards the end. It was great for a laugh, but like I said, not great to get scared by...

thought up by Emma-Louise at 12:59 am
Email ThisBlogThis!Share to TwitterShare to FacebookShare to Pinterest