I was told by my housemate the other day that I should really start fake tanning my face as I fake tan my body so much... I said it was not necessary as I wear makeup everyday without fail so nobody sees the paleness (apart from her...and Cameron!). But, after our exam, we were out shopping and she was getting some new fake tan, and I was having a look and came across Soltan Beautiful Bronze Self-Tan Face Cream.

I am not going to lie to you, it was a panic buy, as I had decided to get a face tanner by that point, but Abi was already making her way to the till. This one looked nice enough so I just grabbed it, and the cutest mini tan mitt ever(!) and made my impulse purchase, along with a slightly more decisive purchase of the matching body tan (I usually use St Moritz but haven't got round to ordering any lately).

I tried the face tan out for the first time last night and didnt really see a difference until this evening, after I had put another layer on. The tan comes out as a white lotion which I wasn't expecting, so that threw me a little. I used the mini tan mitt as suggested (and because it is so darn cute). It was easy to go on, just like applying moisturiser really, though as it didn't come out with a tint, this could probably result in a very uneven tan! As I say, there was no real immediate effect and I went to bed. 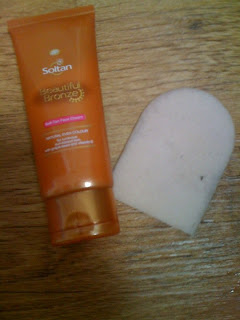 The next morning I applied another layer using the mitt again and about an hour later I applied my makeup as usual (I had planned to leave it a little longer but then we decided to go out and I didn't want to look like a state walking into town!). When I took my makeup back off tonight I noticed that I couldnt tell I was taking it off as much as I usually could (I usually see my face go from a golden tan colour to a white, ghostlike mess).

I was pleased with the result the tan had given as it means I probably won't need as much makeup tomorrow as my face is now a shade darker. It doesn't cover my dark circles (though this was never promised by the tan!). I am overall quite pleased witht the tan, though I would suggest you take care as it suggests tanning neck as well, but where I had fake tanned my neck with normal tan, and then with the facial tanner, I have ended up with a weird double dip effect on my neck, not sexy! I would recommend this tan as it is currently on offer in Boots for £4.66, bargain!

I will also review the Soltan body tanning mist in a later review, comparing it to my usual fake tan (St Moritz).

thought up by Emma-Louise at 10:53 pm
Email ThisBlogThis!Share to TwitterShare to FacebookShare to Pinterest