So last time I updated you all was on Saturday night, halfway through my birthday celebrations. On the Sunday I was given a lay in by my mum and was able to just relax and read a book which was so nice! Around midday we went to visit my nan and then came back to the house again for a few hours. Cameron had a sleep so I got to relax even more. We went to pick my brother up from the station and all went over for Sunday dinner at my nan's. I had chosen the meat and we had beef, was so yummy. After we had eaten we went back over to my mum's and my mum went to pick up my cousin from the station and Cameron's dad came round to see him for a bit.

That night I went out to town with my brother and cousin. The plan was to have only a few drinks and then go home but it turned into quite a big night out... 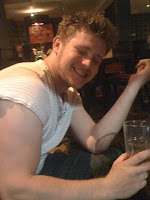 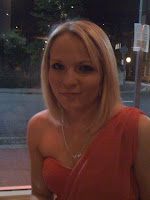 ﻿
My cousin and brothers tend to be quite rowdy when they drink so I was a little worried, but luckily they were on their best behaviour. In fact, it was me that ended up getting us kicked out of Wetherspoons! It was past midnight and I wanted to head over to the bar where my friend was working so wanted to hurry up and finish drinking. My brother ordered one last drink, a cocktail and they brought over a pitcher instead. I said he didn't order one (as he didn't), James tried to say it was ok, but it was my birthday and I wanted to leave and he hadn't ordered one! So I argued it and said he didn't want it at all then. So the stupid barmaid went and got security to chuck us out! We left and went to the other bar. I found the whole thing hilarious, petty barmaid!

We got to the other bar and that is when I did the silly thing of mixing drinks. 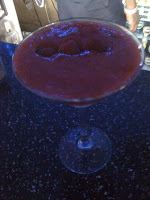 ﻿
﻿
I switched from wine to strawberry daiquiris and shots of apple sours and sambucca, bad idea! My friend who worked in the bar gave me a lift home luckily and, apart from a stupid drunken phone call to who I though was my ex (but apparently was his friend), I managed to not get into any bad situations....

The next morning was my birthday and I felt very unwell... Luckily I started feeling a bit better after some breakfast and watching The Only Way is Essex from the night before and seeing my best friend who shares the same birthday as me.

After she left I opened my presents from my mum and nan and had a bit of a lie down whilst waiting for my friend to pick me up and take me to the spa.

The spa rang me and it turned out they had made a mistake with our booking and my friend could only have one treatment instead of two. Because they had messed up we were allowed to spend the day in the spa for free and only paid for the treatments. The spa was amazing! It had a pool, jacuzzi, spa pool, aromatherapy cave, steam and sauna rooms and a relaxation room. We went and got changed into our swimming costumes and big fluffy white robes and slippers before spending the rest of the afternoon in the spa.
﻿
﻿

﻿
﻿
It was such a great day. We were able to talk loads which was nice as I feel I don't have enough time to speak to her anymore. The sauna was way too hot for me as I get really claustrophobic, but I was alright in the steam room and it really helped my hangover. The best part of the spa for me was the jacuzzi, even if it was a bit violent! I also loved chilling out in the relaxation room and reading magazines and napping. But the best part had to be the treatments! About 15 minutes before my appointment, I washed my hair and changed into my robe and then went for my massage. I have never felt more relaxed! It was amazing, as a spa virgin beforehand I would say that this was the best thing I have ever paid for beauty wise. After my massage the therapist went straight into my facial which was pretty cool as well, although I have since had a slight allergic reaction on my neck to the oils she used which is a bit of a shame. I actually fell asleep during my facial, embarrassing! Afterwards I was feeling really relaxed and met up with my friend who had a facial as well. We paid and left and headed back over to my mum's where I had my birthday tea.

On the way home a pidgeon literally dive bombed into my friend's car and died which was awful! She was really shaken up, and even worse was that when we stopped at my mum's there were pidgeon feathers with gore attached to them stuck to her car, made me feel very sick!

After that I was a little less hungry.... but the birthday tea was amazing. My mum always makes a feast and this was no exception. We had plenty of sweets and chocolate and cakes and crisps and sausage rolls, was yummy!
﻿
﻿
That evening I finished off my birthday long weekend with a relaxing night in with a curry and Date Night, one of the DVDs I got for my birthday.
﻿

It was the perfect end to a perfect birthday. There were some disappointments, but ultimately it resulted in a better weekend than I had actually planned so I am more than happy. I also got so many lovely presents for my birthday so I feel very lucky about that too! 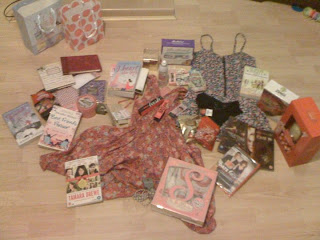 Hope everyone else had a lovely bank holiday weekend!

thought up by Emma-Louise at 11:39 pm
Email ThisBlogThis!Share to TwitterShare to FacebookShare to Pinterest