Film of the Week!

I've noticed lately that I often end up watching films and watch at least two a week. I have decided to start a film of the week. These films are not necessarily the most recent or popular but ones I watch because I own or it's on the TV that week. This week, to start me off I will be having two!

﻿﻿ ﻿﻿  This is an all time favourite of mine! I stupidly gave my brother my copy of it on DVD a couple of years ago and now I miss having it! So, when I saw that it was on TV tonight I jumped at the chance to watch it. I usually hate older films, especially 'scary' ones as I find the quality of the picture irritating. I make an exception for this one however as it is such a classic. I love Jack Nicholson and think he makes this film what it is. I love the last few scenes the best as I feel the film has a long lead up to this section and it is totally worth the wait. I know some people think it doesn't have enough gore or suspense to it but I disagree. I love a film that 'f***s with your head' and this certainly does that. I am going to have to get the DVD again as I've remembered how much I like it. 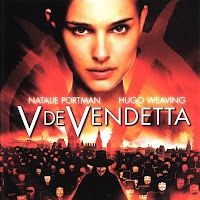 As you may have already gathered, I am a little in love with Natalie Portman and I think she is amazing in this film. I am all for actors and actresses taking their role seriously and I feel she did the ultimate sacrifice for this film in shaving her hair off! I love the storyline behind this film. I usually don't like all the action packed films out there but this one is a strange genre in that it has a bit of everything. I feel it has parallels to how government is heading at the moment which makes the film relevant and interesting. The film flows really well and keeps me on the edge of my seat, even when I have seen it time and time again. I love it!

thought up by Emma-Louise at 11:43 pm
Email ThisBlogThis!Share to TwitterShare to FacebookShare to Pinterest