It was Cameron's Christening today, in case you hadn't heard! I still felt really unwell this morning, and my poor mum had been so ill in the night, she wasn't even sure if she was going to make it to the church!

I was incredibly stressed this morning due to all this, and because I had been planning it for so long... I may have had a bit of a shouting session at my mum and my brother, and I cried as I was feeling so unwell and my hair and eyelashes just would not go the way I wanted them to. I think everyone was happy when me and Cameron were safely tucked away at Sunday school whilst they went to the service in church.

Cameron had a great time in Sunday school with his second cousin Spencer and his great auntie Natalie and me. We played with the instruments and he had some milk before we went and joined the congregation, had the blessing and joined the Sunday school at the front. After a few hyms, the service was over and it was all stress again as I needed to get back to my mum's flat to get me and Cameron changed in only a few minutes.

Everyone was arriving at the church by this point and I made my escape with just Cameron, Aimee and my sister Megan. We hurried about, getting us changed and I reapplied some makeup before getting back to the church. It was pretty hectic back there and a little confusing as Cameron's daddy's family were outside, but mine were inside, so I was trying to split my time between the two before the service started.


Cameron was a little fussy at the start and had a short cry when everyone was looking at him, when we were stood at the font, but then he settled down and he was a little angel when he was being baptised by the Vicar. It did look a little bizarre when the Godparents, parents and Cameron were called to the front as there were 10 of us in total! But the Vicar was lovely, very cheerful and took everything in his stride. Cameron looked adorable when the Vicar held him up after he had been baptised. Everyone loved him!

After he had been officially baptised we all returned to our seats and the Christening was over before I knew it, Cameron fell asleep! He actually was so asleep that he didn't wake up for about half an hour later and so photos outside with the photographer didn't really end up happening which was a shame as it was such a nice day.

Due to waiting with my friend for her mum to pick her up from the church (she has a very young baby and I didn't want her waiting alone), Ashley, Cameron and I didn't get back for awhile after everyone else and so I was a little upset I had missed the start of the party and the unveiling of the gorgeous cupcakes that were made for us by my friend Kirsty at Kirsty's Cakes and Catering.
﻿ ﻿
It was pretty hectic at the flat with so many people there and I felt a little pulled in all directions. It was lovely that so many people came though and I was so grateful that they all came, and also for all of Cameron's gorgeous presents and cards! It was a lovely day. We had lots of photos taken, some of which are featured here. There were also some taken by Carl at Carl Lewis Photography which I haven't seen yet but I know will be great as he has such a great photography style!
﻿ ﻿
﻿ ﻿﻿ ﻿﻿ ﻿﻿ ﻿

After people started leaving, I decided to dress Cameron in some more comfortable clothes as it was so hot, and we opened his presents over the remainder of the day. He loved opening them, but liked the paper and envelopes more to begin with! He did love some of the noisier presents though and especially loved his new walker toy from my brother's girlfriend Zoe and her mum. He was a very lucky boy and got so many presents, I am very grateful and will be writing out thank you cards for everyone. 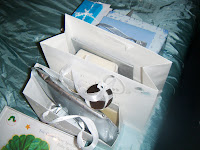 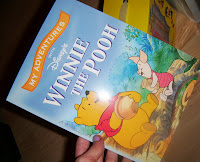 I had such a lovely day and hope everyone who came did as well, Cameron certainly enjoyed it and wore himself out. I am paying the price for pushing myself now though as I feel worse than ever, early(ish) night for me after The Only Way is Essex I think! Cameron is zonked out on top of my mum at the moment, cutie pie. He looks so grown up in the photos, my little man....
﻿ ﻿
Last but not least, thank you to everyone who sent me texts and FB messages yesterday and today wishing us a great day, and asking how it went, much appreciated!

thought up by Emma-Louise at 11:15 pm
Email ThisBlogThis!Share to TwitterShare to FacebookShare to Pinterest