The Magazines I Read (when I get a spare minute!)

I am a self confessed lover of glossy magazines... It is a problem I have come to terms with. Since having Cameron I must admit that I don't actually have the time or money to fund my previous habit so I now tend to only buy a magazine once in a while, and when I do, it often ends up just sitting in my room for about a week before I manage to read it! I cannot just wait until Cameron is in bed at night, like other mums, as that is the time when I do my Uni work! So instead I end up reading the magazines at stupid times in the morning or when my mum has Cameron.

I do love reading them though. I think it is the release I feel from all the stresses of my life when I am just sat in bed flicking through the pretty pages filled with things I cannot afford!

My favourite magazine is definitely More! (mainly because I have been in it so many times!) I currently write a mini blog for this magazine's website and love it! The magazine is great for celebrity gossip, cheap(ish) fashion, and some excellent beauty tips. They don't have as much real life stories as I would like, and have tended to favour couples rather than us single girls in the past, but overall they are a great magazine and do try and take what their fans are saying on board (though they are still using Cheryl Cole as the cover star time and again which I will admit does annoy me!). Their current issue includes a New Look magazine with a 20% off New Look instore and online so make sure you get it (that issue is only on sale until end of Monday!) 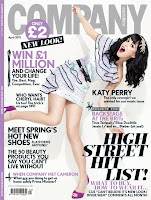 My second favourite magazine is Company. It is a much more grown up read (in my opinion) and tackes much more serious issues such as depression, drugs, rape and assault and have ongoing campagins for things such as banning sunbeds and getting women home safely. The magazine does tend to have even more expensive fashion, but I just tend to flick through these pages. They often have themes to their issues like their British issue, music issue and festival issue. They have a lot of regular sections that I love to read such as looking in readers' houses at their style and great little recipes and what's on at the cinema/on tv. A friend is featured modelling in the current issue that is on sale so go check it out (her name's Emma Sowerby and she is currently in the finals for Miss Cumbria!).

Glamour is another magazine I love and I often get this one as it is sometimes only £1!! Bargain! Glamour also tends to do free things attached to the magazine which I love. It is a much girlier magazine and is often filled with pretty, girly articles and fashion. They do a Glamour Women of the Year award and this is always fun to read. Despite the girly style of the magazine, it is another one that often tackles tough issues such as rape, and a recent article was on a girl who writes to murderers and rapists as it excites her (controversy is this magazine's middle name). They have just celebrated their 10th birthday so have a lot of things to win, and star guests in their current issue so I would suggest checking it out! 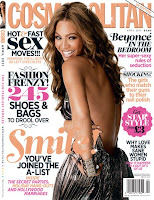 Finally, Cosmopolitan is another great read. It is pretty pricey at over £3 an issue(!) but often has free gifts which can be really great. I will admit that I haven't bought this magazine in some months as I am too poor to justify spending that much on one magazine, but I was lucky enough to have a subscription to this magazine a couple of years ago and I absolutely loved it! The magazine is grown up whilst still being girly, often features really interesting articles and some raunchy ones (it has a reputation as being the 'sex' magazine). I will hopefully be able to get a copy soon and see if it's still as good as I remember!
thought up by Emma-Louise at 5:20 pm
Email ThisBlogThis!Share to TwitterShare to FacebookShare to Pinterest