I have wanted my second foot tattoo done for literally months and months but haven't been able to because I was pregnant and then breastfeeding. I went to have it done yestersay. I was really nervous the night before, despite having had one on my foot before and having had a baby since the last time! I worked myself up for this huge pain but when I was in the studio, I relaxed totally because the guys there are so lovely. My tattooist had come back to the studio just for my tattoo, as he had moved into a new studio that week.
I got into the chair and he set about preparing the needles and applying the stencilled text to my foot. I had two friends Aimee and Abi with me and so I don't really feel too nervous waiting to have the tattoo done. The first contact with the needle is always the worst as it has such a huge buildup in your mind. It was painful, I am not going to lie, but was nothing compared to the pain of childbirth and I was just really excited to see the end result. I squeezed a packet of tissues in my hand to distract me, and talked to the girls and my tattooist throughout. He used some numbing spray after the outline was done, but to be honest I didn't feel it really did anything. I got used to the pain though, and it went really quickly.

I was so pleased with what it looked like, but the guy put the cling film over it before I remembered I wanted a picture done, so the only photo I have at the moment is with cling film over the top. 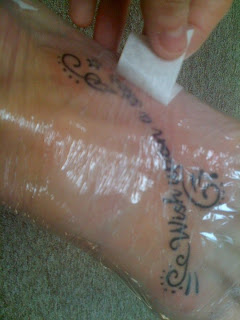 I have to leave the cling film on for 48 hours and then I can have a bath on Sunday and wash all the buildup of ink off. Then I will be putting a better photo on!

The tatooist also said he would touch up both my new and my old tattoos in a couple of weeks when this one has healed, for free. This means that both of them will be a nice black colour, as the older one has faded a little. It will hurt having both done at once, but will be worth it for them to look nice! They will then both be healed and look good for the Christening.

thought up by Emma-Louise at 11:25 am
Email ThisBlogThis!Share to TwitterShare to FacebookShare to Pinterest