How to Look Good whilst being Pregnant: My Maternity Fashion Guide (only works during warmer months, sorry!)

When I was pregnant, I was 20/21 years old and I looked around shops in vain trying to find maternity 'fashion' that wasn't made for people a lot older than me. Everything seemed to be floral, and highly unflattering. So, I got creative with what I wore. I was determined not to end up looking like a big fat lump wearing a sack.
I got a few staple pieces from maternity lines, such as a black and a white vest top (which I wore a lot!), a couple of funny slogan T-shirts, and my absolute lifesavers during pregnancy, my maternity jeans from Mothercare!
﻿ ﻿
﻿ ﻿

These jeans were totally worth buying as I lived in them a lot of the time. They were under bump ones, the over bump ones just look plain weird in my opinion. The fact that they were elasticated, but looked just like normal jeans, made me feel so confident as I could wear 'normal' clothes.

Another thing I disliked about maternity clothes was how expensive they were. Just because women are pregnant, it shouldn't mean they should have to pay more to look 'good'. I started buying things to wear from H & M, as I found that they have more elasticated stuff and loose but stylish tops. I found that if I got things in a slightly bigger size, they lasted longer throughout my pregnancy and looked better and felt comfier. The skirt, I remember, was a size 14, but other than that I mainly bought size 12 clothes which seemed to be fine.

I bought a few tops with famous people on, my Lady Gaga one looked a little funny later on in pregnancy as her nose stretched! There was also a lovely white Madonna one which I wore towards ﻿ ﻿


﻿﻿the end of the pregnancy.


I also bought a couple of maxi dresses as they were luckily in fashion that summer and were easy to wear. I bought my white flowery one in Canada and love it!

I wore it on my 21st birthday, when I was 5 months pregnant. I have since leant it to a friend who is pregnant and she wore it to a family meal and looked stunning. The other one was from New Look and was just plain black.

﻿
﻿
I wore it to hang around the house in as it was so hot, but also wore it to a couple of meals and when I was going over friend' houses.

I found dressing for Special Occassions the hardest, as there were bound to be lots of photos and I wanted to look good, despite being pretty big! For my Mum's Graduation, when I was 7 months pregnant, I wore a lovely navy blue top/dress with black leggings and some pretty blue polka dot wedges.
﻿
﻿

For my Babyshower which was around the same time, I wore one of my old 'Town' dresses, a bright blue and black low cut dress with sequins! My boobs had grown loads by then so I was bursting out a bit, but I wanted to stand out! ﻿
﻿ 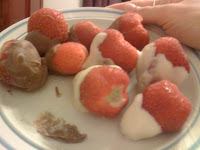 Going on holiday whilst being pregnant was a bit of an effort, packing clothes for the holidays was worse. I feel I managed to look Ok throughout them, though. In Disneyland Paris, I went for casual with my trusty jeans and a couple of loose fitting tops.

In Canada, I went a little bohemian, living in my long, loose fitting, knitted cardigan with jeans and floaty tops. 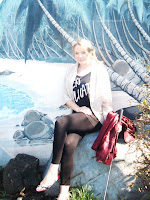 
I went to stay with a friend at her Uni when I was around 4 months pregnant, and they had a St Patrick's day party. I wore a pretty black top with a corsage on it and felt pretty confident. I didn't drink and went to bed early, but it's the effort that counts, right?

As my pregnancy neared an end, it was tempting to just let myself go as I felt so frustrated. But I was pretty low during this time, and I needed to keep my spirits up, so instead I had my highlights done and I spent awhile each day making myself look nice, doing my makeup and often curling my hair.

During a holiday to Cornwall, I made an extra effort to look nice in the evenings and wore a couple of long tops over leggings with some low wedge heels which made me feel like I wasn't so big and unattractive! 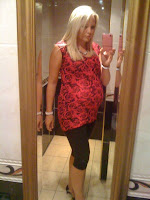 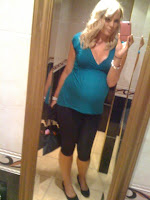 I also wore ﻿﻿﻿accessories such as flowery headbands, necklaces and bracelets to add to my﻿ outfits.﻿﻿﻿

﻿
﻿
﻿﻿
When the weather got really hot, I lived in my flowery pink dress I got from H & M. It was so nice to just pull it over my head and be dressed, then go and sunbathe in the garden all day.


In the last few days I wore my 'Coming Soon' T-Shirt I had got from New Look Maternity line which was quite amusing.

There were a few times when I got it wrong, once I looked like a tent!
﻿
﻿

And, of course, I didn't make an effort to look great every single day of my pregnancy as sometimes I just wanted to relax in jogging bottoms and a baggy top. But, I will definitely be pulling out some of my trusty maternity clothes next time I am pregnant, as well as taking my own advice and buying some normal clothes in a slightly bigger size, as it is nice to keep looking good whilst being pregnant. I know it made me feel a whole lot better anyway.
thought up by Emma-Louise at 11:26 am
Email ThisBlogThis!Share to TwitterShare to FacebookShare to Pinterest