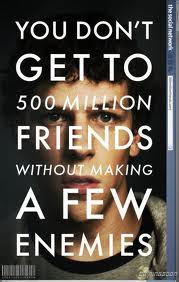 I had meant to go and see the Social Network when I first saw the trailers for it, as I am a massive Facebook fan. But, I never got round to it and before I knew it, the DVD was out already. I saw clips of it whilst watching the BAFTAs and remembered that I wanted to watch it, so when I saw it in Sainsbury's today I decided to buy it to watch tonight, even though it was £9.99 which is more than I usually spend on films (I like buying them too much so give myself a £5 limit!).

I had a bit of a nightmare afternoon/evening stressing over work and feeling pretty down, but sat in my mum's room with her to watch the film. Usually, when watching films late at night, my mum will fall asleep halfway through which can be pretty annoying. Not this film! We were both sat on the edge of our seats (obviously not literally, we were on a bed, but you get what I mean) throughout the entire film.

It is a really fast paced script, needing your full attention when you watch it. It's one of those films where if you start talking for just a minute, you might completely lose track of what is happening in the plot. It's a true story, which is fascinating to watch and learn how Facebook was created, especially as someone who spends so much time on the site.

You find yourself really getting involved in the story and feeling for both of the main characters, but especially Facebook's creator, Mark Zuckerberg. Without giving the whole plot away, at the end, I found myself feeling both envious and sorry for him. He took a gap in the market and used his very clever and creative mind to produce something that now has over 500 million active users!

I loved this film so much, it has the potential of becoming my new obsession, if it wasn't already (I am a self-confessed fb addict!). I urge anyone who has yet to see it to either rent or buy it and give it a watch. If you're anything like me, you will be glued to the screen and at the end will be logging on to update your status as:


'Social Network was amazing'....
thought up by Emma-Louise at 12:31 am
Email ThisBlogThis!Share to TwitterShare to FacebookShare to Pinterest