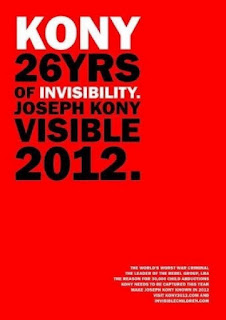 I don't know if you would have heard of the Kony 2012 movement that is currently becoming the biggest trend on both Twitter and Facebook, but if you haven't here is what it is all about:

-A guy called Joseph Kony has been mindlesssly abducting young children and then forcing them to become part of his child army where the boys are made to kill and the girls become sex slaves.

-There are people who have been campaigning for many years now to find Kony and stop the abduction of children that they refer to as invisable. They want to make these children visible to the world.

-Their aim for 2012 is to make Kony as famous as celebrities, make him a household name across the globe and help continue to raise funds to help find him.

This is all explained in further detail in the 30 minute film:

thought up by Emma-Louise at 5:11 pm
Email ThisBlogThis!Share to TwitterShare to FacebookShare to Pinterest
Labels: kony 2012