Every year as Valentine's day approaches there are always single people moaning about being alone on the 'most romantic day of the year'. The last two years I have been single. The first was when I was a few months pregnant with Cameron and things were very emotional with my ex boyfriend so it was pretty much written off. Last year I had been single for a long time, had a five month old baby and so much Uni work I was struggling to cope. As my flatmate was out for a meal with her boyfriend, my best friend came over and we cooked dinner together and had some wine and watched a scary film. She even brought me a red rose. This was probably the most romantic thing someone has ever done for me on Valentine's day. Seriously.

The thing is, even though it's usually the single people that bitch about February 14th, being in a couple doesn't guarantee you romance. My first boyfriend managed a huge bar of dairy milk one year and a heated up ready meal another whilst the boyfriend I was with at Uni managed a bit better and took me out for a meal. I am one of those people that love to spoil the person I am with and so in the past have gone all out on Valentine's, just as I have done with Christmas and birthdays. Having been with my boyfriend for four months, I have come to realise that he is the opposite to me when it comes to occassions. 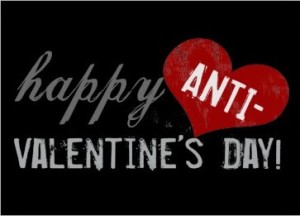 When the red and pink decorations started appearing in shops just after Christmas was over with, the topic of Valentine's came up. Turns out he is 'anti' Valentine's day. His reason? He says it is too commercialised (which is true) and that he tells me he loves me every day so why does he need to show me how much on one day (also true). So why do I feel a bit disappointed that I will not be celebrating along with all the other smug coupled up people on this 'special' day? Probably because I am a girl and I have been brought up watching Disney and seeing men sweeping women off their feet at every turn. 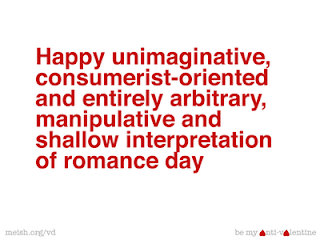 Deep down though I know I don't need something saying how much he loves me on it when he says it to me all the time and shows me every day. I am really happy for the first time in such a long time. That's all that matters (though if he's reading this, the romantic crap would still be very much appreciated)... 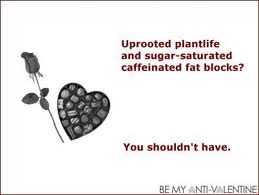 thought up by Emma-Louise at 5:55 pm
Email ThisBlogThis!Share to TwitterShare to FacebookShare to Pinterest
Labels: anti valentines, boyfriend, valentines day