Last night I went to see New Years Eve with my mum and nan. I had wanted to see it ever since I saw the trailers as it is just like Valentine's Day which I really liked. The film boasts a cast full of high profile actors including Ashton Kutcher, Jessica Biel, Sarah Jessica Parker, Michelle Pfeiffer, Robert De Niro, Hilary Swank, Halle Berry and even has Jon Bon Jovi in a lead role! 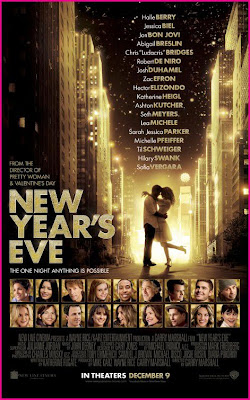 The film follows several people on New Years Eve, giving you an insight into their lives and how they celebrate the new year. There's Ashton's character who hates New Years Eve after a heartbreak in his past; Michelle's character who is fed up of being a pushover and decides to fulfill all her resolutions in one night; Jessica Biel's character who finds herself in a battle to give birth to the first baby of 2012; Sarah Jessica Parker playing a harrassed single mum to a teen and Jon Bon Jovi as someone very similar to himself playing alongside Katherine Heigl.

The film had the whole audience laughing in places and had me crying a couple of times too. It feels fast paced throughout and therefore seems longer than it actually is (118 minutes). As the film nears its ending and the clock reaches midnight, the stories are tied up and everything begins to fall into place. Don't leave as soon as the credits start rolling though as there are a series of bloopers at the end which, although cheesey, are fun to watch and a bit of light relief after some of the more serious scenes.


If you loved Valentines Day, you will love this film. I would highly recommend it!!

thought up by Emma-Louise at 10:40 am
Email ThisBlogThis!Share to TwitterShare to FacebookShare to Pinterest
Labels: cinema, film review, new years eve