You may remember me speaking about top secret plans a while back, well it wasn't me wanting to keep them secret but in fact a magazine who was writing an article about me. The plans were the photoshoot for the article, and the magazine came out yesterday.

The article is about how Cameron was conceived, as a result of a very short rebound relationship. As I was worried it might, it has managed to look a lot worse than it was due to sensationalist headlines used by the magazine (which I am really not happy about) suggesting I had Cameron as a result of a one night stand. Having never had a one night stand in my life I am really annoyed and upset that this is the tagline they went with. The article also seems to suggest that I resent Cameron for no longer having a social life (totally untrue, as anyone who knows me will realise).

So today I wanted to just set the record straight in my OWN words. I have had nasty girls bitch about me due to not knowing the full facts.

I was with my ex for 6 months when i realised things weren't working out because I didn't trust him, and the distance was a big issue. I split with him and started seeing a co-worker. When I found out I was pregnant, although I had been with the two men close together in time, the dates suggested I was having my ex's baby, and I split with the guy I had been seeing, coping with the pregnancy alone as my ex didn't want to know.

Once having Cameron, and him being fair in complexion (my ex is mixed race), I realised I had obviously gotten it wrong, but to be sure I took a paternity test with the other guy, which proved he was Cameron's dad. Since then, he has seen Cameron regularly.

That's the story, with all the magazines spin taken off of it.

One thing I have learnt from this experience is that, although I want to write, I definitely don't want to write features as I would hate having to twist stories in order to sell something. At the end of the day, the people in these stories are real people with real emotions. It's something magazines should consider before writing things... 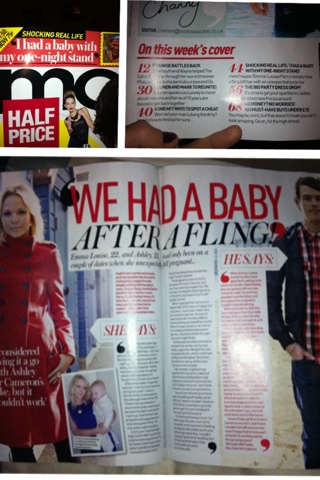 thought up by Emma-Louise at 9:58 am
Email ThisBlogThis!Share to TwitterShare to FacebookShare to Pinterest
Labels: Cameron, more magazine, pregnancy