Pirates of the Caribbean: On Stranger Tides


I am not sure if I even went to see the last of the Pirates... films at the cinema to be honest but when I heard this one was coming out all I thought of was Johnny Depp... in THAT outfit... and I was sold. So, when my mum suggested booking it as an end of Uni thing I wasn't about to say no.
﻿
﻿
We went to see it in 3D. I think you can see it as a normal film, but where's the fun in that? Apart from looking like a tit in my very attractive 3D glasses, I loved the whole thing. I usually hate the cinema, but tonight was great.

My nan looked after Cameron for me so both me, my mum and my brother and his girlfriend were able to go. The film went straight into the action and the storyline was interesting throughout. I do believe I was sat literally on the edge of my seat for some of the film.

As with the previous films, there were also plenty of laughs due to great comic timing and a good script. Johnny was as gorgeous as ever. I don't usually like the whole guys in makeup thing, but make an exception for him, mmmm! Also have a slight girl crush on Penelope Cruz who is in the film alongside Johnny, lucky cow! I want her figure! 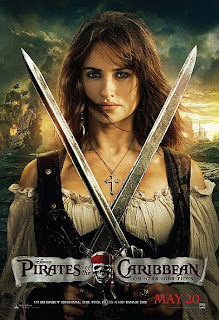 I don't want to spoil the film for those who haven't seen it. But what I will say is it is definitely worth a watch, definitely worth seeing it in 3D and most definitely worth staying behind the extra 5 minutes after everyone else decides to leave for the credits to finish rolling and the last scene.... It's worth the wait..

Let me know your opinions on the film if you've seen it, and if you haven't? What are you waiting for? Go see it! If not for anything else, for the yumminess that is Mr Depp!

thought up by Emma-Louise at 12:13 am
Email ThisBlogThis!Share to TwitterShare to FacebookShare to Pinterest