Film of the Week 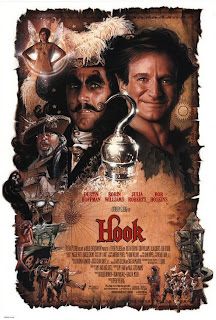 I decided to watch Hook tonight as I was wanting a nice, feel good film to watch whilst starting back on my dissertation.

I love this film as it never fails to make me smile. It feels even more special since having a baby of my own seeing the relationship the parents have with their children. I cried at least three times watching it tonight (though that could be down to my hormones which have been in overdrive) but the one part that never fails to reduce me to tears is where the kids come back in the window and their mum thinks she is dreaming. When she realises she isn't dreaming and the children say mummy, I start howling like a baby! I love a good cry sometimes so this was a good film for my mood.

I would recommend this film to anyone who hasn't seen it as it is a great version of the classic Disney film. I have heard rumours that Julia Roberts was a complete diva on set which makes me laugh as she plays a tiny fairy in the film so I just picture her teeny tiny stamping her feet! I love Robin Williams and think he plays the role really well. It's a family film too, so anyone out there with kids, they can enjoy this one with you.

1 film that definitely won't be getting film of the week is Paranormal Activity.
﻿
﻿
I watched it earlier, having only seen clips beforehand and can honestly say it was the biggest pile of rubbish I have ever watched! It was so boring, and fake and just awful! Do not bother with it if you haven't already seen it. I've been told the sequal is better, but I will be giving it a miss...

thought up by Emma-Louise at 10:39 pm
Email ThisBlogThis!Share to TwitterShare to FacebookShare to Pinterest