I have used a facial primer for around a year now and once I started using one I would not go back to not using one! They work by smoothing the face and creating a 'blank canvas' for you to apply makeup. The first one I had was from e.l.f as it was all the rage last spring/summer. It was alright, but I thought that for £6 it was a bit of a rip off as it was mainly packaging. For Christmas I got L'Oreal's primer which is £14. I thought it was good, but it was a little thicker in consistency than I would have liked. So, when I found The Smoother, Maybelleine's primer, and tested it on my hand to find it to bhe as smooth as silk, I was sold. 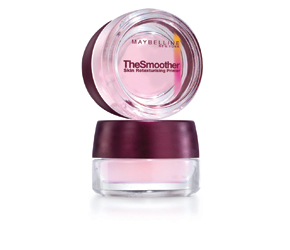 I was a little worried I would be disappointed by the primer after having raved about it online and having a few people buy it from my recommendation, but luckily for me (and for them!) I found the primer to be just as good as I expected. It is a clear gel like texture and goes on really smoothly and easily. I only needed a tiny amount for it to work which means that the pot should last for a long time.

My makeup went on easily and smoothly and stayed on all day without the need to touch it up. The primer is £9.99 in Superdrug and Boots which I think is a fair enough price for a great primer. There is also a deal on at Superdrug at the moment where if you buy any three items of selected makeup across most brands, you get the third free. I would recommend this product to anyone so what are you waiting for?

thought up by Emma-Louise at 6:47 pm
Email ThisBlogThis!Share to TwitterShare to FacebookShare to Pinterest