Being a single mummy to Cameron means I don't really get the chance to go out a lot and I was a little shocked to discover I hadn't been out at all in 2011! As it is now April, and because I have been feeling quite low at the moment, I decided it was high time I went on a night out.

I went out with my friend Sealy who is the perfect wing-girl on a night out. She is stunning as well which I am slightly jealous of her for! My mum looked after Cameron for me and I really got into the getting ready part of the night, watching The Only Way is Essex whilst getting ready and curling my hair, doing fake tan and my makeup. I wore the pink dress I won from Rachel's Miss Rebel Competition and the bright pink looked pretty good next to my tan. I also wore my black shoe boots even though I knew my toes would suffer as they did last time I wore them. 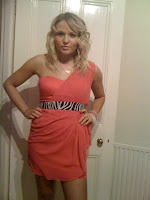 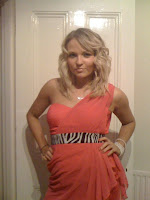 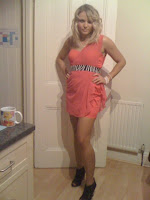 Sealy came round my mum's and we had a couple of glasses of wine before we left. We went to a 21st birthday party in a hotel function room before going into town and we carried on drinking Rose. We were already very drunk at the hotel and adopted a pink balloon which we drew a face onto and vowed not to lose 'her' all night. We spent a lot of time in the toilets, taking photos in the mirror and making friends with other drunk girls. 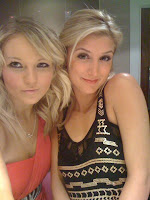 ﻿ ﻿ ﻿ ﻿ ﻿﻿﻿ ﻿﻿﻿ ﻿﻿
After we left the hotel we decided to walk to our friend Mory's Bar The Lounge. We did consider a taxi but thought it would be a bit of a waste so instead we must have looked amusing walking across town to the bar. We asked Mory what drink we should have and he said French Martini so we had that! Mixing drinks is a bad bad idea! We kept having French Martinis whilst there.
﻿ ﻿
When we left, we went to a bar called Klute which charged entry, but decided it was not worth staying as there weren't many people there, so we left and tried to get our money back from the bouncers but they wouldn't let us! We then went across the road to an over 21's bar called 1812. The doorman there tried to stop us going in as they were about to close, but we said we only wanted one drink and he let us. We ordered another round of French Martinis, these ones came with a pineapple chunk, yum! 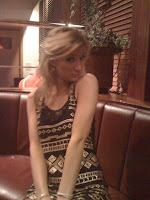 We left there and went back to The Lounge, where we had sambucca and tequila rose shots and stayed until after the bar closed and chatted to Mory who we have both known for years. We left around 2am, I think (?) when I started feeling really sick.

We got a taxi home but neither of us had any money for it so we said we would go get some from the house, and then just didn't go back!! My mum started having a go at us as the taxi driver came knocking for us demanding he be paid! Mum paid him luckily, but she wasn't happy with us about it. I am not sure if I was sick, I am terrified of being sick and haven't been sick in over ten years, but I do remember being in the bathroom on the point of it. After that though, I passed out in bed. Sealy was sick a lot though and was still feeling awful today. I was feeling pretty rough all day too and we spent a lot of the day sleeping. I eventually went out at 8pm to get something for dinner, but I am definitely not feeling like another big night out anytime soon!

thought up by Emma-Louise at 11:43 pm
Email ThisBlogThis!Share to TwitterShare to FacebookShare to Pinterest