I just had to update this again quickly as I made a quick video of me feeding Cameron this lunchtime.

Despite his rather grumpy face, he absolutely loved his food today. Loved it so much, in fact, that one meal was not enough, and he had some more later in the day. I originally only gave him a tiny bit more in his little bowl but upon finishing this, he started crying for more so I ended up giving him the rest of the packet! He gulped it all down enthusiastically and then cried after it was all gone, even staring longingly at the empty bowl and crying. I ended up giving him some milk after that. He is getting to be a very greedy boy!

The food I gave him today was from the Ella's Kitchen range and was the carrot, apple and parsnip puree. I will definitely be getting him that one again! He seems to take after me, in that he loves his savoury more than his sweet. I'm not arguing with this though as it is so much better for young babies to be eating vegetables rather than sweet things. 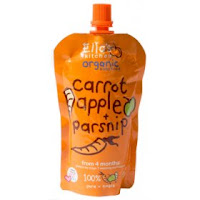 I think he will still like chocolate in the future, however, as he looks longingly at mine when I have it and tries to grab some of my food from my hand. I will be continuing to feed him two small meals a day from now on as I feel he needs it now, especially after todays little tantrum!
thought up by Emma-Louise at 1:16 am
Email ThisBlogThis!Share to TwitterShare to FacebookShare to Pinterest